I agree Our site saves small pieces of text information (cookies) on your device in order to deliver better content and for statistical purposes. You can disable the usage of cookies by changing the settings of your browser. By browsing our website without changing the browser settings you grant us permission to store that information on your device.

Asphalt at The Tower of London Battlements 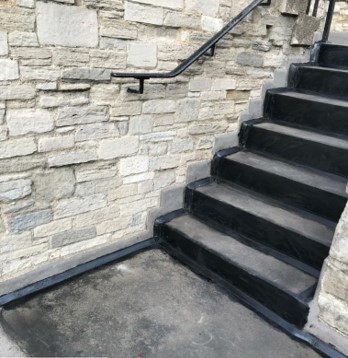 Asphalt is frequently specified for heritage projects and this is no different when The Battlements at the Tower of London needed asphalt works.

The work the RJ Evans team carried out here was the replacement of an asphalt staircase which had suffered from wear and tear after years of heavy foot traffic.

The ability to last for years before replacement being needed is testament to asphalts durability when you consider the Tower of London has just under 3 million visitors1 per year.

We carried out this work by removing the existing covering of the mastic asphalt steps. As asphalt is recyclable we took the asphalt away and used it in our asphalt mixer so it could be re-used as a mastic asphalt waterproof screed.

Next, we applied primer to the substrate leaving it completely waterproof. Then we applied two new coats of mastic asphalt. The top coat contained a mixture of consisting of paving grit to allow the staircase to provide traction and stand up to the heavy foot traffic it would incur at one of London’s premium tourist attractions.

All of the side stringers were repaired along the stair case. And the finish was let without solar reflective paint. The reason for this was so the repaired steps would match the existing steps at the Tower of London once they had weathered.

About the Battlements at the Tower of London

The huge stone battlements forming the Tower's walls have protected kings and queens since Henry III's fortifications in the mid-13th century.

These battlements are made up of the South, North and East Battlements.

The South Battlements include a Medieval Palace and St Thomas’s tower built by Edward the First.

The North Battlements hosted wild and exotic beasts for more than 600 years.

Asphalt is Decorative, Durable and Above All an Elite Waterproofing Material

The use of Asphalt throughout an iconic tourist attraction like ‘The Tower of London’ is a great example of how the traditional waterproofing material is able to remain effective and whist standing up to intense foot traffic encounter at such a popular tourist destination.

Click here to get more asphalt, roofing and waterproofing blogs from RJ Evans.